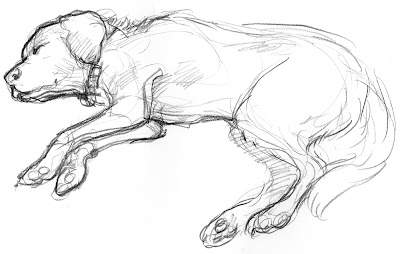 Here's a sketch of our new dog Q (aka The Beast). Generally, he's not a cooperative drawing subject; he's usually prancing around like a kid with ADD on a pogo stick after downing a 6-pack of Red Bull. Well, that's an exaggeration. Q is actually a very even-tempered dog. Sure he gets crazed, but overall he's a cool guy.
I grew up with cats and always assumed I would have feline pets but I married a woman that's allergic to cats. We agreed to get a cat-sized dog someday.
I've been pining for Pugs since I can remember but fate had a different plan. Q, a Puggle (half Pug, half Beagle), came into our lives serendipitously. Friends rescued Q from a shelter in South Carolina fully expecting to keep him. When they brought him home to NH, the family dog didn't take kindly to the new addition. Our friends decided they had to find the Puggle a new home.
And that's where my wife and I come into the picture. We took Q for a night. Then a weekend. Then a week. Two months later, and he's become an integral part of our lives. A dog is a lot of work but well worthwhile. 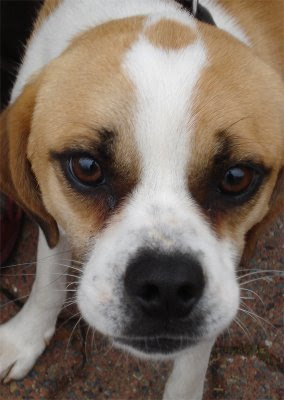 Posted by Robert Squier at 9:37 PM

I am FAR too lazy for a dog. I see my poor neighbors walking their pooches past my house in snowstorms and -12° weather and I say "no, thank you." I love the things, just not enough to drag my ass out of my warm bed for a sub-zero perambulation around the neighborhood. Sorry...

Q is cute and your picture of him crashed out is great too. I can just seem him crashing like this.

Argh! Noticed spelling mistakes in my post, so I decided to re-post it.

As a non-pet person, even I have to admit that Q is capable of melting my heart. Then again, my exposure to him has been in small doses...

The sketch is great! I really like the looseness of the line-art and the challenging pose you selected. Animals are difficult to draw. There's no doubt that's a dog and more specifically; your dog. Nicely done.