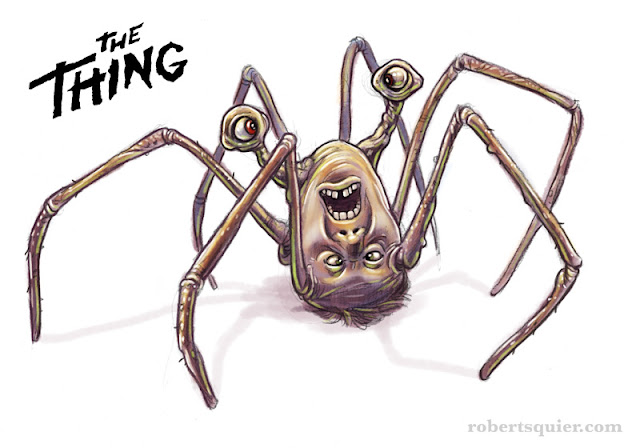 Last night, when I really should have been working on an illustration gig, I did this… this… THING.

John Carpenter's 1982 classic, The Thing, centers around a shape-shifting alien that can perfectly mimic other life forms. When the alien infiltrates an isolated Antarctica outpost, the human inhabitants are discreetly taken over one by one. The remaining humans don't know who amongst them is human... or a THING. And hilarity ensues.

The movie blew my mind as a kid. The creature design was demented, horrifying and totally original – and I LOVED it. The wild creativity I saw unleashed on the screen was profoundly inspiring. Yeah, I was weird kid…

Tomorrow a prequel to The Thing, entitled The Thing, is being released. My expectations for the film are low–but I'm looking forward to revisiting that world. Both the world of The Thing and the world of my youth.

So rather than working last night I played. I drew The Thing and I had a blast. I suspect I'll soon be visiting more creatures from my youth: Godzilla, Alien, Evil from Time Bandits, The Creature from the Black Lagoon… hey, I'm feeling kinda inspired. I guess looking back can do that for a person.
Posted by Robert Squier at 8:55 PM

I'm going to be showing Aliens in my Aliens and Vampires in Literature elective. Want to join us?

Did you watch the original The Thing? http://www.imdb.com/title/tt0044121/ It definitely did not have as epic a monster as the 1982 version, but I think still worth a watch.

I do hope they don't redo Terry Gilliam's master piece that is Time Bandits. a) the original is perfect and b) I just rewatched it and think most parents won't let kids watch that now, which is a shame.

However, you doing some drawings of Evil I am all for! This image of the Thing is great!