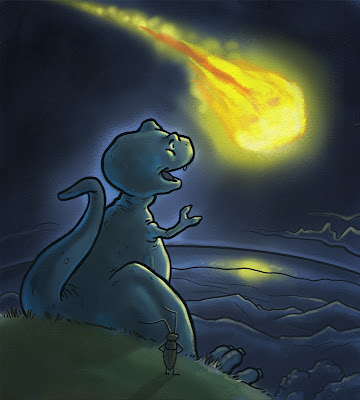 What did happen to the dinosaurs? I like Gary Larson's theory that they were done in by cigarettes. A more popular theory is that they were wiped out by a giant asteroid. I'd like to think ol' T-Rex enjoyed the light show before he went extinct.

This illustration is 100% digital. I used a Wacom tablet with Photoshop. Once again I challenged myself to bring an illustration from concept to completion in short order - this took 3.5 hours.

At first I thought this was funny - but now I find it kind of disturbing. Poor T-Rex; he looks so happy...

Great idea. Very well drawn and executed. I like your style.

Very cool take on the theme! I love the perspective of the dinosaur watching the impending crash. Nicely done.

I don't find it disturbing at all, Robert. As a matter of fact, I started grinning as soon as the image loaded.

I LOVE the cricket, by the way. Or is it a cockroach???

Lovely!
The idea of the great dinosaur near the small cricket is very beautiful.

So cute! Great work with wacom and ps, love that cricket!

Hey buddy, great illo! I like your use of the digital color(how'd you do that?) It looks painterly and really evokes a nice mood. The composition is very effective and the characters are adorable (especailly the cockroach:) Good job!

poor guy! i love the idea.

As dangerous as it ultimately is, the meteor is just gorgeous. Nice work!

Terrific work, and you made me miss the genius of Gary Larson!!!

BTW, we still have blue whales, which are far bigger than dinosaurs! The water must keep dousing their cigarettes!

well, he didn't know what was coming, and died happy! beautiful work, as always Robert!

Who doesn't love dinosaurs? I really like your work

Very cute idea and good work on this. I like to think he had some fun before the end. :)

I like the dark humor of it. The cockroach was a brilliant touch. If we could see his face, I'm guessing it would carry a sly grin - he knows cockroaches will survive!

Wonderful, but so sad!